REZONING BLUNDER MUST BE CORRECTED

Newcastle’s Convict Lumberyard and Enterprise Park were wrongly zoned for mixed commercial and residential use in the Newcastle City Centre LEP 2008.
The Parks and Playgrounds Movement has written a welcome letter to the newly elected Newcastle City Councillors wishing them well and indicating that they believe that probity and good management are the hallmarks of a successful Local Government.

The Convict Lumberyard provides a unique openspace setting for important historic buildings and is an especially important part of Newcastle’s convict past. It is of National significance and was Gazetted as 7(d) Environmental Protection Heritage Site Zone by the Minister for Planning in 1992. Under the modern planning scheme the Convict Lumberyard and Enterprise Park should be zoned 6(a)Openspace the same as Fort Scratchley.

They have also brought their attention to the Convict Lumberyard and Enterprise Park at Scott Street in Newcastle. The historic Convict Lumberyard was vested in the Newcastle Council by the Honourable Nick Greiner in 1989 and Enterprise Park is a Crown Reserve R97943 with the Council appointed Trustee notified in the NSW Government Gazette 23/11/90.
The last Newcastle Council unintentionally initiated the wrong zoning of these two properties when drafting the City Centre Local Environmental Plan 2008. This error was only discovered at the end of their term and it is now the new council’s problem to rectify. This may be done by an amendment to the City Centre LEP 2008 and we therefore have asked Councillors to resolve “that Council prepare an amendment to the City Centre LEP 2008 that will restore the openspace zonings that reflect the land use that these properties perform for the community”.
The most appropriate zone to comply with the current zoning template is Open Space 6(a) the same as Fort Scratchley.
The Convict Lumberyard and Enterprise Park are landscaped as public parklands and provide a setting for important historic buildings and the protection of archaeological relics. The Convict Lumberyard is a State Heritage Listed site and is managed by a Plan of Management.

Enterprise Park was the first part of the Newcastle Harbour Foreshore Park completed in 1986 to mark the Centenary of service to the Newcastle Region by the Chamber of Commerce and Industry 1886 - 1986. It was zoned for open space in 1960 and the Open Space 6 (a) Zone should be restored as the appropriate zone for the Park.
at 8:44 PM No comments: Links to this post

Shortly after 2pm, the group unfurled the large banner that they had smuggled into the public gallery, which showed pictures of reefs, forests and ecosystem and the word "UNLESS". A Rising Tide member jumped onto the barrier separating the chamber from the public gallery and began an impassioned plea to Penny Wong.

"Senator Wong, we need urgent action against climate change," he said. "Greenhouse pollution must stop rising, and start falling; you must peak carbon emissions by 2010; you must stop the expansion of the coal industry." The protester continued this refrain from the ledge until dragged out by Parliamentary security officers.

The activists were led out of Parliament House and banned from re-entry for 24 hours.
Source: http://www.risingtide.org.au/node/790
Commentary from Bob Brown: http://bob-brown.greensmps.org.au/content/greencast/parliament-climate-protest

Against Marohasy on Climate Change

Originally posted by Dr. Glenn Albrecht at his personal blog.

We need to take a good hard look at the type of ‘facts’ Jennifer Marohasy (JM) presents before signing on to her view of the world.

Also, take a good hard look at the above photo supporting the article. It shows a river with many dead trees (river red gums?) on its edges. The caption says “Salinity levels in the Murray have halved, but you won’t hear that from global warming zealots”. Is Marohasy and her paymaster (The Australian) actually suggesting that the landscape in the photograph shows a system in recovery? It looks more like a catastrophe to me.
Click here for the complete pdf version of A Case of Fuzzy Thinking?
Glenn Albrecht 07/09/2008
at 12:49 AM No comments: Links to this post

Panoramic Visions of Newcastle on the Coquun Hunter

Newcastle Gerald readers are invited to view a beautiful display of early panoramas of Newcastle recently installed at the Maritime Centre at Honeysuckle.

The exhibition is sponsored by the University of Newcastle’s School of Humanities and Social Sciences and is a collaborative event involving the University, the Maritime Centre and the History Council of New South Wales.

The beautiful panoramas of early Newcastle will be officially launched tomorrow September 6th 2008 by Phil Ashley-Brown Head of 1233 Radio at 10am at the Maritime Centre Honeysuckle.

Two of the panoramas have been re-photographed by Associate Professor Allan Chawner from today's perspectives to give viewers a clear view of how the Port has been transformed over time.

Newcastle on the Edge will be run at the Maritime Centre during History Week from Saturday 6 - Sunday 14 September 2008.

For more information consult the "Newcastle on the Edge" Blog: http://newcastleontheedge.blogspot.com/

Next weekend's council elections could be overshadowed by the end of the universe next Wednesday morning, in a move likely to work to the advantage of Greens candidates.

So far, pundits have identified two possible outcomes for the Newcastle local government elections: an increase in power of the Labor and centre-right Buman independent blocs, or a protest vote to work in the favour of the Greens and possibly the Socialist Alliance, whose star candidate Zane Alcorn could pick up votes for the left.

What few commentators have considered is the one in a million possibility that the Large Hadron Collider, a particle accelerator designed to emulate conditions at the beginning of the universe, could suck all of the universe into a tiny space and end life as we know it, thereby avoiding the need for an election at all. There is a small risk that the LHC could produce micro black holes, strangelets, and vacuum bubbles.

While there is considerable uncertainty as to what these things are, let alone what cosmological and electoral effects they may have, there is little doubt that, should the universe come to an end, the chances of outright Labor control of the council would considerably diminish.

Neither Greens candidate Michael Osborne nor Socialist Alliance candidate Zane Alcorn were available for comment at the time of publication.

However environmental advocates were said to be pleased by the news, stating that if local councils failed to make the social shifts necessary to address peak oil and climate change (such as local food production, independence from the grid, fast, frequent and free public transport and smart housing design), the implosion of the universe would avert the need to address these twin crises.
at 12:25 AM No comments: Links to this post 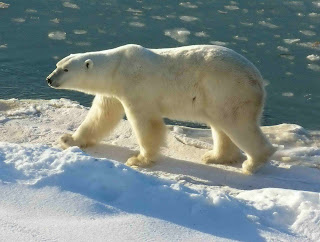 For the first time in human history, it is now possible to sail a ship all the way around the Arctic ice cap, according to the National Snow and Ice Data Center.

The melting of the ice caps is expected to have significant impacts on climate change, including the loss of oceanic insulation, the loss of the albedo effect, and the acidification and algification of the oceans. If the Arctic ice cap melts by 2013 as predicted, it could produce runaway climate effects which are impossible to control and endanger human life on Earth.

Shipping companies have already announced plans to run their ships through the newly opened North-East passage.

Former Premier of NSW Nick Greiner has just completed a report to Ports minister Joe Tripodi recommending that the world's largest coal export port in Newcastle be doubled by 2013 and ultimately tripled, in a move set to be disastrous for the Earth's climate.

Picture by Ansgar Walk 2004. May be reproduced or altered only with attribution and under the same license.
at 2:29 PM 1 comment: Links to this post