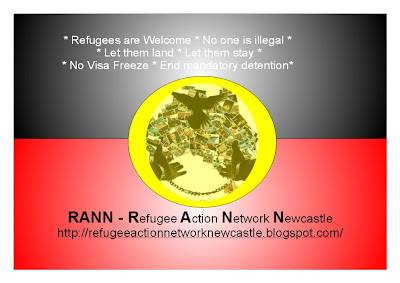 RANN streetstall for world Refugee Week
Saturday 18 June
Hamilton Clocktower 10am-Noon
petitions, information-
come along and help us talk to
people about asylum seeker issues
http://refugeeactionnetworknewcastle.blogspot.com/
contact niko 0406296141 or email niko@idl.com.au
at 3:46 AM No comments: Links to this post

Why politicians should lie about their sex lives Over recent years, we've been witness to a number of sex scandals that have either brought down or come close to bringing down a number of politicians. From the recent scandal about former NSW Transport Minister David Campbell's visit to a gay sex club to Kevin Rudd's visit to the New York strip club Scores, to Bill Clinton's affair with Monica Lewinsky or Portland mayor Sam Adams' relationship with a junior male staffer, the mass media's obsession with politician's sex lives often seems to take issues like war, poverty or climate change completely off the public agenda.

Let me say outright that I do not necessarily support any of these politicians, and I think that embarrassing politicians is a fantastic social pastime. But the parading of politician's private lives before the cameras is insulting to the public, distracting, perverse and can easily degenerate into moral crusading and at its worst, outright queerphobia.

There doesn't seem to be any good solution to this problem. Writing letters to newspapers or blogs doesn't stop scandals reaching the front pages, restraint from the media is unlikely (given that sex sells), avoiding the question tends to fuel more speculation, and regulating what the media can publish is an infringement on free speech.

Barnaby Joyce should put out a press release every second Tuesday laying out in sordid detail the story of a new orgy he had had the previous Friday night. Lee Rhiannon should claim to have made out with Pamela Anderson. Penny Wong should come out as straight. Julie Bishop should claim to have three husbands. Wayne Swan should reveal his late-night visits to see Blossie, the Ringtail Possum at Taronga Zoo. Steven Fielding should claim that he never had sex before his committed relationship of 24 years. Every politician should try to outdo each other with more fantastic tales of romps and flings until the mass media finally gives up trying to satisfy our "right to know".

And let's not limit this to politicians. Media personalities, sportspeople, religious figures and workers at corner stores should be allowed to get in on the fun as well. Perhaps all the members of the Rotary should claim to be in a group relationship and publicise swingers nights.

Of course there are some cases where relationships are non-consensual, abusive or involve corruption, and this should never be tolerated. Sex and gender are political subjects, and should continue to be. Politicians shouldn't lie or deceive the public, except where their sex lives are concerned. But if you are sick of hearing about what the Member for Gernagery gets up to at night and would rather find out what she thinks about new coal-fired power stations or the state of the country's hospitals, join in the fun and suggest it to your local pollie today.
at 11:19 PM No comments: Links to this post