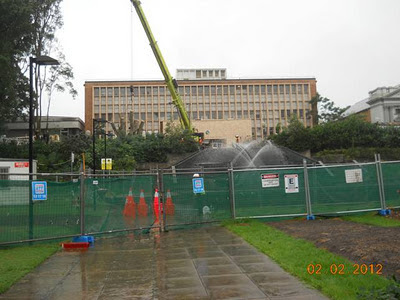 
This is day 3 of the destruction of Newcastle's fine civic trees and cultural centre.


You as the Premier of the New South Wales have brought your government into disgrace by sending a large contingent of police to stand stupidly in the rain for no reason other than to back-up bad governance in the current Council. In this way you have failed the fine city of Newcastle.


How could you be so inept when we relied on you to bring good governance to our city?


Doug Lithgow
Freeman of the City of Newcastle
President of the Parks and Playgrounds Movement
at 11:39 PM No comments: Links to this post

What we have witnessed in Laman St we regard as obscene environmental vandalism and a crime against the historic beauty of Newcastle.

The latter documents are certainly clear evidence in our opinion of just how  badly the council betrayed the citizens of New Lambton. Ward 3 councilors might like to visit our home to view them, but we doubt that you will.

We understand that most of you within the council do not want to know the truth of the matters of Laman St, Novocastrian Park et al.

We also recall the moment when the riot squad was deployed on leading citizens of this town by virtue of your remit as councilors and the self-proclaimed oxymoronic neutrality of the State Government.  Freeman of the City, Citizens of the Year, a doctor, grandmothers, the Lord Mayor, young people, very elderly people all on the receiving end of the riot squad when clearly there was no riot.

We personally experienced this unique moment in Novocastrian history when our elected representatives decided to use martial force to silence those who elected them. Have you read Judge Sidis' comments on her hopes for the new council yet?

The visuals from Laman St will tell the tale at the electoral booths: ranks of armed riot police, double rings of fencing, ranks of security guards all testifying to your apparent inability to govern without armed protection to exclude your own citizenry.

Look at the photos for yourselves, but the photos don't tell the full tale of the intimidation that we citizens experienced under your remit. Was this good old Newcastle or downtown Syria?

Is an armed perimeter around the civic precinct and perhaps the council chamber the new face of our local democracy?

We look forward to the forthcoming election campaign where we sincerely hope that a new council may be elected with the courage to remove the current General Manager so as to appoint a person specifically contracted to revamp the senior administrative culture of Newcastle City Council.

It is clear to us now that at least two directors need to be removed from their current positions.

What is certain is that many of you will be removed at the September election.

This seems like poetic justice to us. You removed the figs, we remove you.  You put the riot squad on to us, we put Novocastrian egalitarian history on to you.

The irony is that you as a body are now condemned by your own majority logic.  You require the political chop to ensure our sense of safety as citizens. You appear to us as a greater danger than any beautiful fig tree.

Since it is the habit of most of you not to respond to our communications, we look forward to seeing you on the campaign trail.

Enraged Ratepayers
at 3:20 PM No comments: Links to this post