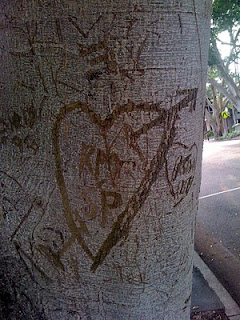 When the Laman Street fig trees are eventually removed in an orderly and staggered fashion, they
should be replaced by Hill's Figs, planted in accordance with modern arboriculture practice and Council's policy for replacing trees (with a similar species).

I'm not surprised by his out of touch idea to create kitsch statuary from the tree bases. I well recall him once declaring that Kooragang was Newcastle's Kakadu wilderness (while supporting heavy industry
there).

However, there may be novelty tourist value in, after eventually replacing the 2 figs at the Darby Street entrance with nearby specimens, creating statues of Tate and Jody McKay from the bases. They could be facing each other with their tongues pointing out and we could call the artwork "Newcastle Politics: Tweedledum and  Tweedledee".

Perhaps even Tweedledum and Tweedledummer", leaving the community to decide which is which.

Keith Parsons
Newcastle.
at 2:55 PM No comments: Links to this post