A Plea to the Business Community of Newcastle 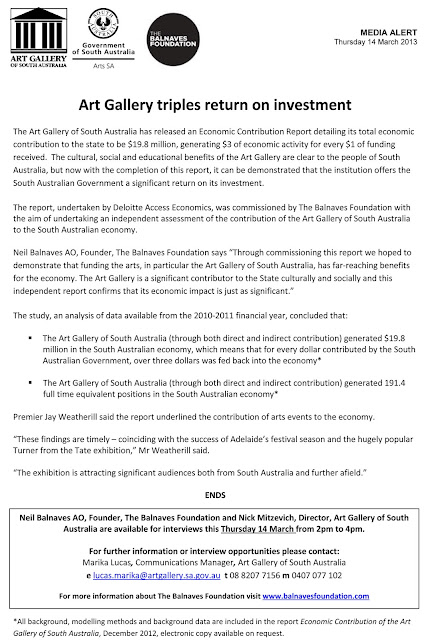 To Whom It May Concern:

I am a supporter of the Newcastle Art Gallery as well as a concerned citizen of Newcastle.

I have concerns about the lack of information regarding significant potential benefits to businesses in Newcastle from cultural tourism.

As someone who has always travelled for art, I know how much I spend on airfares, taxis, hire cars, accommodation, restaurants, shopping and on and on.

I know how little money I actually ever spend on entry to art exhibitions, the exhibitions are relatively inexpensive.

I am dismayed at the thought that the business community in Newcastle is unaware of potential tourism dollars that will certainly eventuate with a refurbished Newcastle Art Gallery.

I am dismayed that the business community stands to lose those significant cultural tourism dollars.

Some examples where art has changed cities would be:


If the planned deveopment of Newcastle Art Gallery went ahead, it would be able to mount significant exhibitions that would attract untold numbers of visitors to this region, who would then spend untold amounts of money, not only in the Art Gallery, but in the surrounding businesses.

Please do not let the redevelopment of the Newcastle Art Gallery slip through our fingers and deny Newcastle and the Newcastle business sector their opportunity to cash in on lucrative cultural tourism dollars.

This must surely appeal to the business minded?

There is to be a vote on the decision to rescind the motion of support by Council (unanimous 12 February 2013) for the redevelopment of the Newcastle Art Gallery. 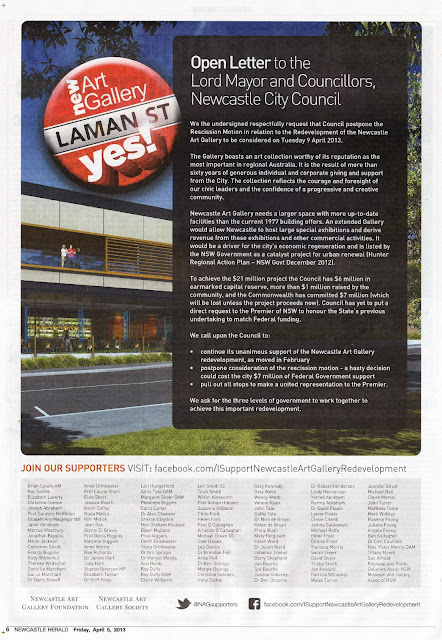 Open Letter to the Lord Mayor and Councillors of Newcastle City Council
published in the Newcastle Herald 5th April 2013 p.6

I feel it is incumbent on me as the Chairman of the Newcastle Art Gallery Foundation to attempt to clear some of the fog that seems to surround the unnecessarily controversial issue of the Art Gallery redevelopment. I cannot help feeling that the facts of the matter have not been made clear to Councillors, and that the State MP for Newcastle has been less than straightforward in his communications with the local media.

Tim Owen, MP, was provided with the detailed plans of the art gallery redevelopment together with the quantity surveyor's costings, on Thursday 28 March and was at that time briefed by the Director and Deputy Director of the art gallery. Later that day he told ABC radio 1233 otherwise.

The fully costed, $21 million project was presented to the Project Control Group on Monday 25th March. Cr McCloy resigned from the Group in the presence of the architects, and refused to hear their presentation to that meeting. He told the meeting (I was there, and I can quote him) "I know we can't afford it". This was the sum total of his contribution to the Project Control Group's meeting.

Lord Mayor McCloy claims to be seeking the elusive, and, let's be honest, unlikely situation, where the NCC is in a trading surplus, before he supports any capital projects.

Have you been advised whether this includes the Hunter Street upgrade and work on the Bathers' Way? Like the art gallery, these projects have capital allocated in reserve and both will draw on the IPART approved special rate variation to be completed. Is there a reason that the art gallery redevelopment should be viewed differently and be subject to a rescission motion taking it back to 2007.

Whether the art gallery redevelopment proceeds or not, the art gallery currently forms a significant part of the infrastructure backlog that Cr McCloy claims is at the base of Council's financial woes and at the forefront of his thinking. Whereas maintenance and upgrading of existing facilities would be included in the redevelopment, the present building's urgent repairs and maintenance will still have to carried out in the absence of a more complete renovation. These include attention to the leaking roof and windows and the need to bring ageing and under-performing air-conditioning, security, fire safety, etc, up to date, to the tune of $3 million.

Laman Street is being renovated at considerable expense, The plans for this street have assumed that the art gallery redevelopment will take place, including the relocation of the loading dock away from the shared 10 kmph pedestrian zone. How 12.5 metre trucks are to share this space has not, as far as I am aware, been addressed in the Laman Street project.

My understanding is that the projected operational costs for the redeveloped gallery would be no more that those for the existing building. This is because of reduced maintenance, increased energy efficiency and the opportunity to derive revenue from commercial activities. On the other hand, should the redevelopment not proceed, it will cost Council almost as much as the increased revenue from the special rate variation. The escalation of costs and the lack of revenue generating activities will add up to an additional $300.000 in annual cost by 2015-2016.

You should be aware that close to $1.5 million has already been spent in planning and preparation, including the demolition of the former education roundhouse and preparing the collection for storage during the building works.

The special rate variation could be invested, as originally intended, in projects which will stabilise the gallery's costs to the City and make room for further cost reduction by way of commercial activities and efficiencies. In other words, by proceeding  with the planned redevelopment.

Finally, let me point out that the project has the advantage of having attracted external money, has been recognised as a catalyst project for urban regeneration, will certainly have an immediate and long term positive impact on the local economy, and can be delivered now.

To hand back the Federal Government grant, to repay the $1 million dollars raised from the community  (how could  that be achieved, I wonder?), to write off the work that has already been done, to yet again change the Laman Street design,  and to undertake the repairs and maintenance on the existing building - well you add it up for yourself. Then decide what is sensible, reasonable and fiscally responsible.

Before voting on the forthcoming rescission motion, I urge you to seek accurate information and  not to allow yourselves to be swayed by deliberately misleading statements emanating from the Lord Mayor's office.