This morning, four people entered the Munmorah Coal-Fired Power Station on the NSW Central Coast, attaching themselves to conveyor belts carrying coal. It is the fifth time that people have shut down a coal-fired power station in Australia this month.

Spokesperson Ann-Marie Rohlfs says "In two days, the Rudd Government will go to the United Nations climate change meeting in Poland. Instead of showing leadership, they are set to announce weak and ineffective domestic emissions reduction targets.

"With the upcoming release of the Climate White Paper, the Rudd Government will hand tens of billions of dollars in compensation and free permits to polluting industries. Public money would be better spent investing in a green renewable future for Australia."

Spokesperson Nicky Ison says, "This week we witnessed the closure of the BP solar plant in Homebush Bay. Australia is missing out on tens of thousands of new jobs by continuing to prop up the coal industry and preventing the transition to a renewable energy economy.

"In September, Nobel Prize Winner Al Gore said 'I believe we have reached the stage where it is time for civil disobedience to prevent the construction of new coal plants.' We are taking him at his word. Today's blockade at the Munmorah Power Station is part of a huge community effort to kick Australia's coal habit.

"We are facing a climate emergency, but our emissions are still rising. We call on the Rudd Government to ensure 2010 is the year Australia's greenhouse emissions peak and begin to rapidly decline.

"If half of the homes in NSW had solar hot water systems, there would be no need for Munmorah Power Station. We would save 1.5 million tonnes of CO2 annually. As the oldest power station in NSW, Munmorah Power station must be the first to go in the new green economy."
at 1:31 PM No comments: Links to this post

Hunter Business Chamber CEO Peter Shinnick (H, 8,11) argued that “The Newcastle rail line was built to service industries now vanished” and “the development of rail in the Hunter is linked to the growth of the coal industry” to imply that the passenger service was a minor sideshow.I believe he is wrong. Many of the vanished colliery lines into the city were never part of the Broadmeadow to Newcastle line he wants removed.For example the Burwood line to the coal staiths east of Honeysuckle.

The first passenger line (the birth of the Great Northern Railway) ran on this line from Newcastle (Honeysuckle) to Maitland (Victoria Street) and celebrated its 150th anniversary last year. It was commemorated with great fanfare, including the presence of the NSW Governor, Professor Bashir.

Newcastle Railway Station, one of the great and historic passenger stations in the state, indeed Australia, was constructed in 1874-78 (although it existed in a primitive form from the late 1850s).It was extended in the 1890s, with overnight accommodation for passengers. It wasn’t built to service a minor branch line. Broadmeadow Station was only completed in 1887

The Great Northern hotel, built in the 1860s was constructed partly to service rail passengers and continued to do so until the 1970s-80s decline of the CBD.

I recall the marshalling yards at the east End in the 1950s-70s with many coal vans, most of which serviced Zaara Street Power Station, but just as many passenger carriages. The carriage shed preserved at Foreshore Park was a passenger carriage cleaning shed.

As an aside,Mr. Shinnick claimed Zaara Street Power station ceased operating in 1959 but it continued to brought on line for emergencies until the 1970s.

The great significance of the Newcastle heavy rail passenger line cannot be diminished by using red herring arguments about our industrial past.
at 3:45 PM No comments: Links to this post 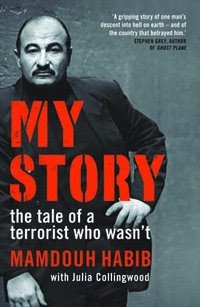 About 40 people heard Mamdouh Habib explain his story- it is an incredible tale of deception by Australian government so-called 'security' agencies. It shocked me to find out just how disgraceful and unprincipled the behaviour of these agencies, and the extent of their influence over the process and execution of law is.

Download Habib's main speech from here: link
Details of his book can be found by here
Photograph and link to Newcastle Herald story here

Click here to download full audio (1 hr) with
Habib also brought a copies of the pamphlet produced by Australian-Muslim Civil Rights Advocacy Network in Arabic as well as English outlining the provisions of the anti-terror legislation and citizen's rights, it also can also be downloaded from the link

Habib explained the key issue is humanity, asking what is the meaning of the law when you can no longer even prove in court what the truth is. He is not allowed to identify ASIO officers in court, so how can he prove his story is true? He emphasised the point of the law is to keep you scared. He went into the details of how he had been asked by Australian security agenices to work for them on the basis of his extensive contacts overseas and linguistic abilities. He always refused these offers. What is stunning is that these security agencies had records of his phone conversations with his wife, dating back to 1993. It goes to show, that anyone can become a "person of interest" in Ruddocks dry phrase... at any time, and well before they know it.

But buy his book. Copies are available at the Resistance Centre, 472 Hunter St Newcastle.- and, think, how can we force an inquiry into the role the Australian Government played in this disgraceful affair?
at 5:54 PM No comments: Links to this post

Two people have stopped and attached themselves to conveyors at the Hazelwood power station in the La Trobe Valley, and a large group of people walked onto the site early this morning.

Spokesperson for the group, Emma Russell said that the government has shown neither the will nor the ability to make the decisions necessary to prevent a climate disaster.

“We need to move on from coal, leaving no one behind. We offer our support to the workers of the Hazelwood power station. We believe it is critical that clean, renewable based industries are set up to provide new livelihoods after coal, such as renewable energy co-operatives and re-localised economies.”

In a public blog dedicated to the action, Ms. Russell linked the group's action to similar actions around the country.
“With direct action against coal infrastructure we wish to break the illusion of corporate control of our environments, creating space for community solutions for change. As this last week has shown with similar actions at Collie and Bayswater power stations, this sentiment is shared right across the country.”

Ms. Russell did not indicate whether she knew of other actions around the country but encouraged others to take similar action.

Hunter residents have planned a vigil at Eraring power station on November 22, office occupations in December to occur simultaneously around the country, and a flotilla of kayaks to prevent coal from leaving Newcastle harbour next March.
at 11:50 AM No comments: Links to this post

Around thirty protesters from climate action group Rising Tide walked onto the site of the Bayswater power station yesterday, preventing the delivery of coal to the station for six hours.

29 people were arrested on the coal piles while four were arrested inside the power station. The group inside had chained themselves to both conveyors with a lock-on pipe and had to be cut off.

Spokesperson for the group, Georgina Woods said that Australia's greenhouse gas emissions were continuing to increase as a result of Australia's dependence on coal-fired power, leading to the slow death of the Great Barrier Reef.

“Where is the plan to phase out facilities like these? Why are we twiddling our thumbs?” Ms Wood asked.

“The nation and the world are watching and we will not get another chance. The people that are here today are pa

rents and grandparents, professionals and tradespeople. We are demanding a commitment from the Government today: Australia’s greenhouse emissions must start dropping from 2010, we must do whatever it takes to save the Barrier Reef from wipe-out and the world from devastating runaway climate change.”

Workers onsite reacted in an overall positive manner to the protest, with some taking photographs and thanking the activists.

The large group had offered to leave the site without fuss once they had made their point, but police insisted upon processing all of them for trespass. A recent report has suggested that the effects of climate change will lead to an increase in crimes such as carbon accounting fraud and domestic violence, tying up resources for police.

Ms. Woods said that more and more people would take action if the Government continued to allow greenhouse gas emissions to increase.
Photos by Conor Ashleigh (top) and Damien Baker (bottom)
at 3:19 PM No comments: Links to this post