COMMUNITY RALLY TO SAVE THE HERALD


Help join the fight to save our community newspaper.

Hamfisted interference by distant and ill-informed corporate executives in the running of a perfectly good and very profitable business is not only unwelcome but potentially destructive to the product and brand.

The Newcastle Herald is a 150 year old institution with deep roots in this city.

But that's not the case here.

Fairfax is proposing to export Novocastrian jobs when there is no compelling business case to do so.

Newcastle Herald management and journalists have been working hand in glove for the past several months to develop a strategy for transition on-line. This was orderly, rational and would have maintained the integrity of the print product while growing the new on-line service.

This move by Fairfax Limited is a slap in the face to the team of people who handled the move to tabloid without a hiccup and who have always been ready to adapt to shifting goalposts in the marketplace.

Asking a group of people at a profitable and successful business to spend countless hours on a new online strategy, only to pull the rug out at the last minute and tell them their jobs are forfeit is an insult, as well as being bad and unwise management.

Moving the production of Newcastle's main source of daily news to New Zealand looks like a panic move in response to the company's depressed share price.

If so, it's a foolish knee-jerk move that will have grave repercussions for Newcastle and for what has been a marvellous business for more than 150 years.

Newcastle Herald to be outsourced to New Zealand

Over 150 years of quality journalism in Newcastle will soon come to an end under a proposal by the Newcastle Herald's parent company Fairfax Media Limited.

In a communication to all Newcastle staff this afternoon Fairfax Limited CEO Greg Hywood, and Fairfax Regional CEO Allan G Browne announced proposed changes to the editorial production of the Illawarra Mercury and Newcastle Herald and the newspapers' weekly community papers.

It is proposed that editorial production for the titles be relocated to Fairfax Editorial Services (FES) in New Zealand.

Under the proposal, a total of around 66 full-time, part-time and casual positions, would no longer be required across the affected titles, representing around 45% of its current staff.

Consultations are currently underway with affected staff, with a call for voluntary redundancies.  If sufficient numbers do not come forward then compulsory redundancies will be required.

While the CEO's believe that no reporting or photographic positions are affected by the proposal, the local community might have a different view, as losing close to half your staff will certainly have an effect on the quality of local journalism.

The Newcastle Herald is a profitable title, so it beggars belief why such changes would be necessary.

The Newcastle Morning Herald and Miners Advocate began publication on the 3rd April 1876 under the visionary leadership of James Fletcher, who created the district's first daily newspaper.

According to the late Dr John Turner, James Fletcher is arguably the father of the City of Newcastle who persuaded the many towns and mines, who were all competing with each other, to come together in the 1870s under an idea known as the Vend scheme, which combined the various mines and the miners, thus doubling the price of coal and wages overnight, thus creating Newcastle's most prosperous period. The instrument he used to unite the people of the various mining villages of the region was the Herald. The Herald became its united voice, and with that voice all the mining towns came to later form the Greater City of Newcastle.


The Newcastle Herald is interwoven into the history of Newcastle.

To have it out sourced to another country is unthinkable.

For more information have a look at this feature on Newcastle Journalism published back in 1966 to commemorate 108 years of journalism in Newcastle. Courtesy of the Cultural Collections of the University of Newcastle. 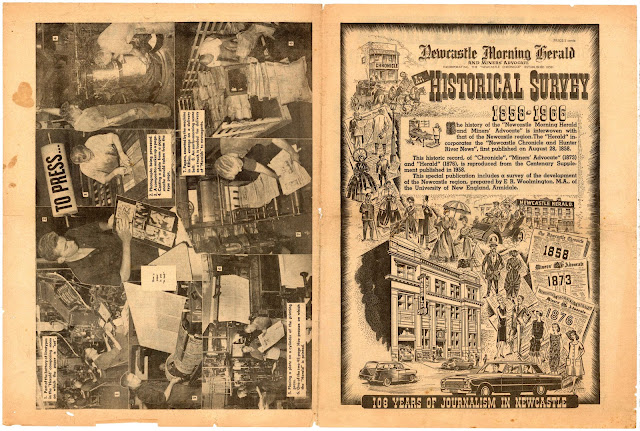