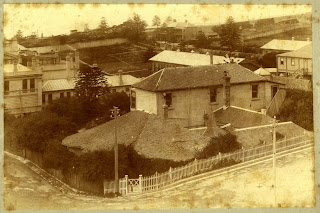 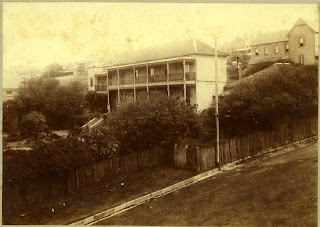 Demolition has already begun, with all roofing removed from Reception House, Kirkwood House and some outbuildings behind Reception House, at James Fletcher Hospital. Kirkwood House is a direct and tangible link to the convict-built Parsonage and nearby Anglican Church buildings, while Reception House is significant as a purpose-designed mental health facility which marked an innovation in mental health care. As Kirkwood House was built as a 1880s extension to the 1820s Anglican Parsonage before the Parsonage was demolished
It is thought that some fabric from the Parsonage is incorporated in the structure of Reception House. A full archaeological assessment should be undertaken.
The precinct of James Fletcher Hospital is a significant historic site relating to early European and settlement and convict history, and part of the Hill Heritage Conservation Area.
The site falls within the Archaeology Zoning Plan detailed in the James Fletcher Hospital Conservation Management Plan. The Conservation Management Plan assesses that the site has High Archaeological Potential to discover remains from the 1819-1820 Parsonage and its outbuildings. Such remains might reach the threshold for state significance as items relating to the convict period (pre-1830) are rare in NSW, noting the potential to find remains of high significance. The assessment should include a program of archaeological test excavations and geo-sensing scans.
Any archeological remains should be properly assessed and if possible conserved.
Further, there would be high archaeological potential to find deposits relating to the convict era below the current footprint of Kirkwood House (and Reception House) perhaps evidence of paths or gardens or outbuildings pertaining to the Parsonage - or simply occupational debris such as discarded bottles (altar wine of course), broken ceramics,etc.
If convict-era fabric is discovered, it would be rare in Newcastle. The earliest visible fabric in Newcastle dates from 1839 or 1840 (a single courthouse column in Parnell Place, and the medical superintendent's cottage at James Fletcher.) Sub-surface examples of convict era fabric are also rare with the only known examples limited to footings well beneath the convict lumberyard surface. Examples of convict Newcastle outside the Coal River Precinct would be highly significant and rare. Further, the whole complex sits in a corner of the James Fletcher Hospital Complex (SHR), close to the former Officer's Mess and Barracks, dating from 1839. The site also formed a corner of the Commandant's farm from 1804 to about 1820.

Notwithstanding the failure of Hunter New England Health to incorporate Kirkwood and Reception Houses into the new facility, the potential disturbance of state-significant archaeology should be of great concern.
An Interim Heritage Order is unlikely to be attained because this can only be initiated by Minister Sartor, who intervened in the process to order the demolition.
(Courtesy of the Archives of the Anglican Diocese of Newcastle held in the University of Newcastle Cultural Collections)
at 4:36 PM No comments: Links to this post 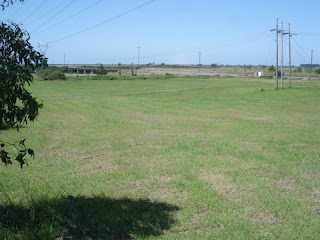 After weeks of stalling from local police and council authorities, the logistics working group of the Camp for Climate Action has announced that the camp will be held on public land on the corner of Mangrove Road and River Road, in Sandgate.

The working group had requested several different sites, and at various stages over the past month, authorities had given and withdrawn permission for all of the proposed sites.

With less than three weeks to go until the site, the working group realised that they could not wait any longer and decided to pick a site and promote it.

Up to 1000 people are expected to participate in the Camp for Climate Action. In late May, the actions working group announced that the highlight of the camp would be a mass blockade of the rail line which delivers coal to the world's biggest coal port.

According to the Gerald's sources, authorities are now tripping over themselves to find a different site for the camp.

The camp was promoted yesterday at a flash mob at Westfield Kotara, where up to 60 people who met each other via the social networking site Facebook froze for five minutes to demand a freeze in the growth of greenhouse gas emissions.

It was also promoted in Parliament by NSW Treasurer Michael Costa on Wednesday and Thursday, in response to questions by Greens MLC John Kaye. The Treasurer misled Parliament into believing that the camp was organised by the NSW Greens in order to divert attention from a question asked by John Kaye. Mr. Kaye asked the Treasurer whether failure to privatise the electricity industry would lead to his resignation, as he promised in early February.
at 10:30 AM No comments: Links to this post The local Herald run a story 'How mining is taking its toll on the Hunter' last Friday. It reports on a secret NSW Government document which admits that coalmining in the Hunter causes massive environmental damage. The
Government, of course, won't endorse the document.

"Mountain top removal" literally means the removal of the mountain tops to get at the coal below. It is the crudest form of environmental violence. Even after strip mining, some trees might grow back. But you can't grow back
a mountain.

It will be the first screening in Australia of this new documentary from the US. The film won this year's Reel Current award selected and was presented by Al Gore at the Nashville Film Festival.