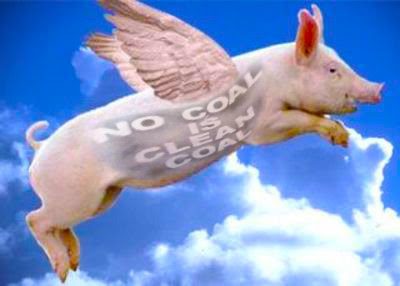 On the Newcastle Herald’s front page (Saturday 25/6/09) we read of the ‘Super Port’ that will triple our coal exports to 300 million tonnes per year and issue in an era of prosperity. But for how long?

On page 12 the other side to this story is buried in a political quagmire known as the Carbon Emissions Trading Scheme (CETS).

Our Governments make only token approaches towards this country’s transition to a clean energy economy. Like all addicts they profess to be kicking the habit, only to invest huge sums of our money in the long term viability of their addiction.

Peter Lewis’ cartoon was excellent. There is no difference between Mexico and its drug money addicted cartels and Australia with its fossil fuel money addicted Governments.

Opponents to change say ‘pigs may fly’ before Australia moves away from coal. And they can rest assured that billions of our dollars are being spent on such delusions as coal sequestration to enable those ‘pigs to keep flying’.

But be aware that everything that goes up must come down, and when these ‘pigs’ start falling we had better have a secure roof over our heads (preferably solar panelled) to break their fall. The Convict Lumber Yard should remain open space and free of development.

The Convict Lumber Yard was established at the inception of the Penal settlement at Newcastle, between the years 1805-1808, and was fully functional by 1820.

The historic site was identified by distinguished archaeologist Damaris Bairstow in the 1989 Excavation Report (1989) as “the only known site in Australia to retain evidence of early convictism on a broad scale”. (p.7)

We have a strong concern for this Region’s heritage and actively work to research, document, investigate and celebrate its history, which is so important to the Australian national identity.

It is a potential world heritage site, and as a community, we should be strategically working towards having it recognised as such.

With specific regard to the proposed development we are concerned that important archaeological features and relics of the Convict Lumber Yard site will be built over in the ensuing development.

These archaeological features and relics identified in June 2007 in the test excavation by Archaeological & Heritage Management Solutions Pty Ltd (AHMS) are of State significance.

The Coal River Heritage Precinct (of which the Convict Lumber Yard forms part) is on the NSW State Heritage Register and should be protected for future generations. No building should be allowed to overshadow it, or bury it.

The proposed development, and amended plans put forward, does not in any way enhance or protect the heritage values of the site. Rather, they bury our heritage under their development.

In addition, a 500mm buffer zone is completely unacceptable. It is recommended that any construction should be at such a distance as not to disturb the integrity of the archaeological site.

The development site is within the Archaeology Zoning Plan area. The 1989 Conservation Policy strongly argued that the Convict Lumber Yard site should be a prominent feature in the Newcastle landscape, and any new structures and plantings, which might impede the view of the site, were to be avoided.

This proposed construction would therefore destroy the authenticity of the historic site, and will in all probability ruin this City’s chances of attaining world heritage status for our iconic site.

The Convict Lumber Yard is also arguably the site where Australia’s first autobiography and dictionary was compiled.

The convict James Hardy Vaux (1782 – fl.1841) wrote his book containing an account of his life up until the end of his sentence at Newcastle’s penal settlement and vocabulary of the ‘Flash Language’ in Newcastle during the years 1811-1814 under the reign of Commandant Thomas Skottowe. His biographers affirm that his work was the first full-length autobiography ever written in Australia, and his Vocabulary of the Flash Language the first dictionary ever compiled in Australia. In addition the Convict Lumber Yard is also the site where two important colonial treasures, namely the two Chests constructed for Governor Macquarie (and now held in the State Library of NSW in Sydney), were constructed.

So it is not only an important and unique early colonial industrial site, birthplace of colonial industry in the Colony, but also a literary and cultural centre of national importance as well.

This site is therefore a potential world heritage site, and so this proposal to build over the top of it will certainly be viewed as a retrograde act towards our future tourism potential and opportunities and national identity.

Our ultimate goal is to ensure that Newcastle’s historic places achieve world-class distinction and recognition.

To do this its history has to be properly researched, documented and safeguarded for future generations so that people can continue to recognise and be inspired by this Region’s significant achievements.

The Convict Lumber Yard is a ‘Nominated Place’ as part of the Coal River (Mulubinba) Cultural Landscape National Nomination and is currently under consideration by the Department of Environment, Water, Heritage and the Arts.

We must ensure that The Convict Lumber Yard heritage site, that has forged the most important developments in this Nation’s history, is properly accorded the respect it deserves.

Burying such achievements should not be an option. 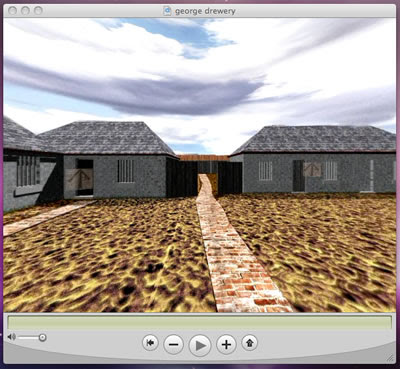 The Virtual Convict Lumber Yard circa 1840 [An Interactive Presentation by George Drewery c.1990s] prepared as a 360 Quicktime. Be sure to view with the Quicktime Viewer for 360 effect and click on convict arrows for 3D views of Convict Lumber Yard. (11 MB Mov File]
at 11:45 AM No comments: Links to this post