At a ceremony held on the 30 June at Ervin Gallery Sydney the Mayfield East Public School won the National Trust Schools Competition 2008.

With over 400 entrants including those from private and church schools, this award is quite an outstanding achievement for the children of Class 3/4 P and their teachers Ms Sue Pryor and aide Vicki Robertson.

The annual competition inspires students to celebrate their local heritage, along the theme of ‘Our Place’, and encourages students to explore their suburbs and towns, getting to know the people and places that make them unique.

Mayfield East Public School, who are celebrating their 150th anniversary of the birth of their school, invited local identities to be interviewed. The interviewees were each asked around 10-15 questions relating to the early history of the school and environs including Aboriginal history. Then the children drew their subjects as part of their drawing class. The guests included former student Mrs Vera Deacon and University Archivist Gionni Di Gravio.

The children created a replica of their original school house from the 1850s, and explored historical identities such as the late Daniel F. Cooksey, who reported on some finding of aboriginal artefacts on the site of the school in 1925. The University of Newcastle's website relating to the Cooksey Collection is located here:


The kids were very excited and chased down the original artefacts held in the Australian Museum and invited Dr Stan Florek to bring them along to their school for 'Show and Tell'. 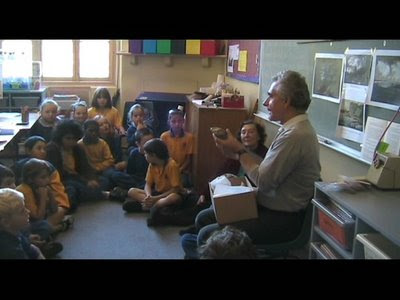 They even tracked down two of his grandsons and invited one, Mr Ian Cooksey, to speak to them as well, along with a former academic in the French Department, Col Whitehead, who has a great interest in Aboriginal stone implements and had made copies of Cooksey's reports in the 1980s.

The web blog for the school's history is located here:

The Gerald congratulates Mayfield East Public School for this great success and in particular the staff and students of Class 3/4P for their great achievement.
at 11:36 AM